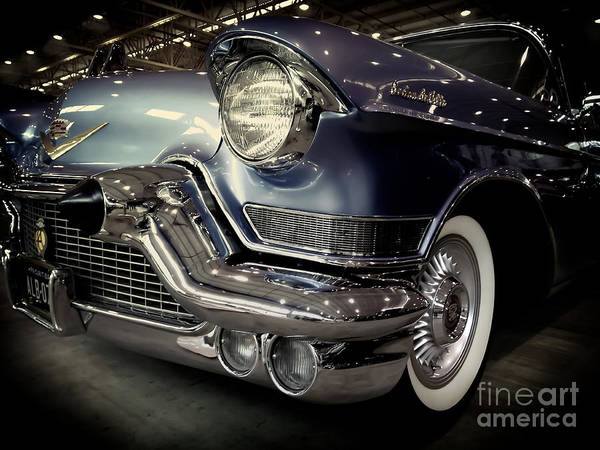 The watermark in the lower right corner of the image will not appear on the final print.

Rolled in a Tube

Cadillac 1957 art print by Franchi Torres.   Our art prints are produced on acid-free papers using archival inks to guarantee that they last a lifetime without fading or loss of color. All art prints include a 1" white border around the image to allow for future framing and matting, if desired.

The Cadillac Series 62 is a series of cars which was ... more

The Cadillac Series 62 is a series of cars which was produced by Cadillac from 1940 through 1964. Originally designed to replace the entry level Series 65, it became the Cadillac Series 6200 in 1959, and remained that until it was renamed to Cadillac Calais for the 1965 model year. The Series 62 was also marketed as the Sixty-Two Front end styling was marked by rubber bumper guard tips and dual circular lamps set into the lower bumper section. Side trim was revised and a dual taillight theme was used. Identifying the standard 62 models were bright metal moldings, just forward of the rear wheel openings, highlighted by seven horizontal wind slits. At the upper end this fender brake trim joined a horizontal molding that ran along a conical flare extending towards both taillamps. A crest medallion was seen on the forward angled rear fins. De Villes had special nameplates on the front fenders.

I am Mechanic Technologist but now I dedicate myself to photography, its restoration and colorization also to the creation of digital art The images that result after being processed in photoshop have a very real visual since they are carefully adjusted according to the skin tones and the materials in the environment. The images can be printed on Canvas, Posters, towels, mugs, T-shirts, The themes are very diverse from Hollywood stars, Rock Stars, Famous people, Old cars, Planes and trains Restoring and coloring photographs, traversing each pixel makes me feel the sensation of being present at the exact moment and place of the shot